Grades: Middle school and up

An eight-week course engaging older kids with more advanced improvisation, theatre games, character and text work. Whether your child is new to the acting process or a veteran this program challenges the older student with more in-depth scene and character work. 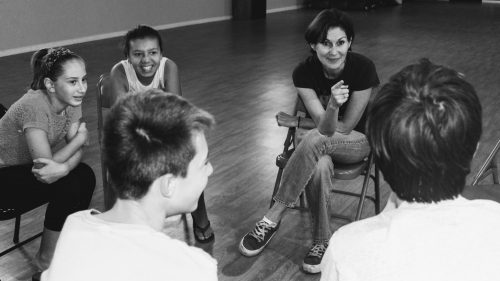 For the past 20 years, aside from acting and raising her three children, Pam has been developing and teaching dance and theatre. For the Bendheim Performing Arts Center in Scarsdale New York, she created a jazz dance division and then was asked to create a theatre arts division that was a combination of acting classes and productions.  She directed over 20 productions at this venue.  Hollywood Arts Council commissioned Pam to create an educational theatre program to be used in schools, she implemented the program at Cheremoya school and was honored with an educational achievement award by then CA State Assemblyman Mike Fuerer. Pam has been the 7th grade drama teacher at The Wesley School in North Hollywood for the last 4 years. Her company,Village Arts, has grown into a robust program on the campus of Colfax Charter School where Pam directs an after school play (with multiple casts) and in the summer a 5 week Theatre arts camp. Pam has a BFA degree from Point Park University and has enjoyed an acting career on stage, film and television as well as penning two plays produced in New York, LA and Boston.

Try out a Village Arts Class for FREE
Contact us or just show up for the first class to try them out!

Join our theatre classes for kids and teens!
Village Arts Theatre is located in Valley Village, adjacent to the NOHO Arts district.  We offer Kids and Teens art, dance and theatre classes and workshops!

@villageartsvv is a place for everyone. We build self confidence in your child. #villageartstheatre

Classes start this week! Link in bio. There is som

Our Village Arts teens take on this powerful play

Looking for a great way to start your morning. Com

Sign up today. Classes start soon. There is someth

New classes starting soon! Find out more on our we

Looking to add some creativity to your kids life?

Space is filling up fast. We’ve just added a Wed